The exhibition, donated by the Mason Family Foundation of Utah,  premiered in September 2018 and showcases over 60 mounts from around North America.  Jerry Mason, partnering with the leading conservation organizations, has established one of the most valuable  collections of North American specimens available to the public. The Mason Wildlife Exhibit celebrates people who hunt, fish, and act as stewards of the land and water. In a time when connecting to the great outdoors is increasingly difficult, it is more important than ever for people of all ages to have this opportunity to explore and celebrate our wildlife resources. 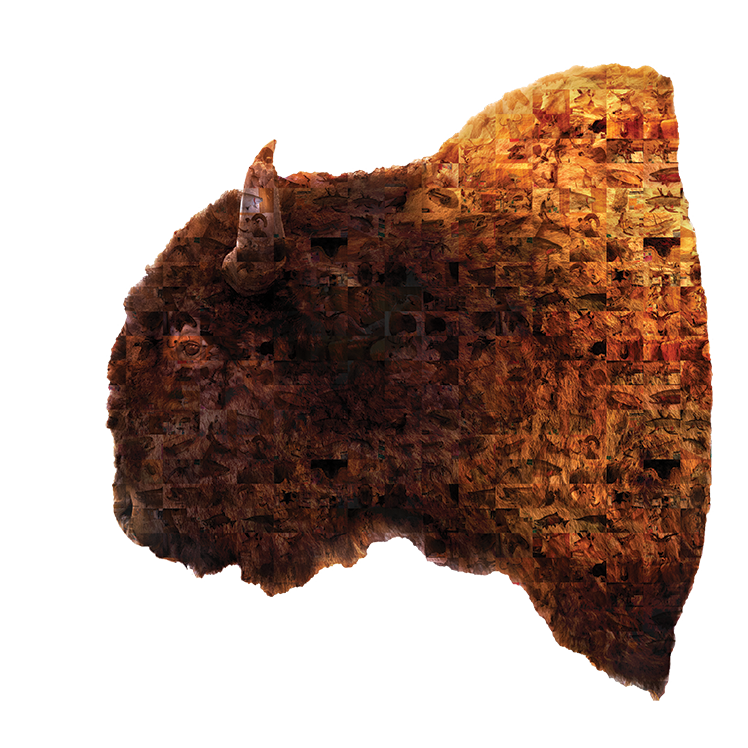 Finding Us on the USU Campus

The Exhibit is in the S.J. and Jessie E. Quinney Natural Resources Research Library. The exhibit is free and open to the public.

Your visit is an excellent opportunity to see animals up close and gain a better understanding of their size and adaptive characteristics. The museum has many touchable specimens on display. All exhibits are indoors and the facility is wheelchair accessible and air-conditioned.

The Mason Wildlife Exhibit has many animal specimens on display. Visitors often ask about what these specimens are and how they were made. Most of the animals in the exhibits were once alive but are now examples of taxidermy.

Taxidermy is a way to preserve an animal for display or study. There are many different ways to do taxidermy, but they usually involve mounting a real animal’s skin on a fake body. The word taxidermy combines the words taxis (which means arrangement) and derma (which means skin). So, taxidermy is all about arranging skin to make animals look alive again.

Why taxidermy an animal?

Taxidermy preserves an animal – which allows people for many generations to see what an animal looked like when it was alive. Because body parts like skin are preserved, future scientists can get all sorts of useful information from taxidermied animals, like size, color and texture, and evolution.

Some taxidermy doesn’t include the animal at all. Taxidermists are talented artists who can also re-create catch-and-release game from clear photographs. Most of the fish mounted in this exhibit are actually made entirely from man-made materials leaving the fish alive and in their natural habitat.

How is taxidermy created?

After an animal dies, it gets taken to a professional taxidermist. The taxidermist skins the animal and preserves the skin with chemicals. The skin is mounted over a form that resembles the live animal. Most forms are made of a hard, plastic-like foam. Once the skin is on the form, a taxidermist adds clay and other materials to the form to make the shape just right. Glass eyes make the animal look alive. The skin is then pinned in place and left to dry.

After the skin dries, the taxidermist removes the pins and adds final touch-ups. These might include paint, brushing and blow drying the animal’s fur, and adding wet spots to the nose or eyes to make it look even more alive.

Jerald Elliott Mason (“Jerry”) and Miriam Elizabeth Peterson were born and raised in small American towns a half-continent apart, Jerry in Circleville, Ohio (born November 29, 1926) and Miriam in Fairview, Utah (born August 11, 1928). They met decades later in Southern California, where Jerry was pursuing a career in aeronautical engineering and Miriam was working as a stewardess for Western Airlines. They were married in the spring of 1955 in Miriam’s family home in Fairview, then returned to California where they bought their first home (with the help of the G.I. Bill) and had two daughters, Elizabeth and Catherine. Miriam kept her eye on Utah, and eventually Jerry learned about a small but growing aerospace company located outside of Brigham City. In 1960 he accepted a position with Thiokol Corporation and moved the family to Utah. There they added to their family with two more children, Cynthia and John.

Far from feeling dragged into Miriam’s world, Jerry embraced Utah as if it were his home state. His love of the outdoors found fertile ground in the Wasatch Mountains. Several of his earliest hunting and fishing experiences occurred in and around the Peterson sheep ranching properties in Sanpete County, often joined by his new brothers-in-law, Lewis Peterson and Spencer Eccles. These early experiences inspired a lifetime of sharing his love of the outdoors with others. Eventually Jerry and Miriam’s family grew to include eleven grandchildren, and Jerry seized on every opportunity to take family and friends to the wilderness, be it far-flung river floats or annual trail maintenance projects in the Uintahs.

Jerry’s passion for hunting and fishing expanded steadily to include North American species and locales far beyond Utah. His expeditions covered countless states across the continent as well as Alaska, British Columbia, the Yukon, Northwest Territories, and Saskatchewan. As these expeditions grew in length and complexity, Jerry learned the value of painstaking research and planning (among other examples of his preparation, Jerry precisely loaded his own ammunition to match the animals he pursued).

Along with Jerry’s exploits in the field, so grew his understanding of the importance of conservation and the role of hunting in wildlife management. Soon he began to spend more time on a variety of conservation projects and positions than on hunting. He served on multiple Box Elder County planning committees, on the Utah Wildlife Federation, for the Division of Wildlife Resources Big Game Board, and helped the Bear River Bird Refuge re-emerge from the Great Salt Lake.

The wildlife collection exhibited here was previously housed at the Mason home in Brigham City. Jerry and Miriam frequently opened their doors to any and all interested in seeing the collection, including many boy scout and school groups. In this they began to appreciate the educational potential of exposing the collection to a wider audience. Jerry and Miriam began discussions with Utah State University and entered into an agreement to donate the wildlife collection to the university. This project took many years and efforts from countless people at USU, most notably Terry Messmer who worked closely with Jerry to understand and establish the history and purpose of the collection and spearheaded efforts at USU to make the exhibit happen.

Jerry Mason died on May 9, 2004. He did not live to see this exhibit but would have wanted visitors to view not just a collection of animals but also explore broader ideas about the role of hunting in wildlife management and the critical importance of resource conservation.